Why do I need the Licking Stick?

Over the last couple of days we were flooded with new trail cam pictures from customers that were able to put their Licking Sticks out and finally had a chance to check those cameras over the weekend. They weren't sure if they would see results with this new "Licking Stick thing", but saw some of the pictures other people were getting and thought "hey, I'll give it a whirl." Within a couple of days, sometimes even within a couple of hours, satisfied customers are seeing results and interest on their newly placed Licking Sticks. 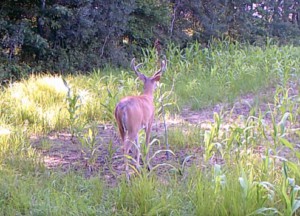 Bucks, does and fawns alike, all showing their curiosity and leaving their mark on this new "thing" that showed up in their food plot, trail, field edge, or near their favorite watering hole. We understand the science behind The Licking Stick, but with the amount of questions we have received we are beginning to realize maybe not everyone else does. We've found the most common question to be "Why do I need The Licking Stick?" especially from those avid hunters who have been putting in their due diligence over the last few months, planning, plotting and beginning to pattern the deer on their land already. They've been getting some pictures on their trail cams, they "know" what deer they have on their land.

Why do they need The Licking Stick? 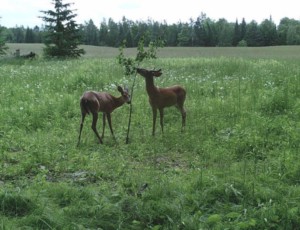 Well, there are a few reasons. I would say the first, and one of the most obvious reasons, is the quality and quantity of pictures you are getting on your cameras. Have you had a buck you've seen on camera once or twice, and you're trying to get a better look at him but the shots you are getting might be him jumping through and out of the frame, or looking into the camera with his rack out of the shot, or the booty picture of him walking away and you're trying to check out the antlers in the grainy, blurry background? I think we have all had our fair share of those. 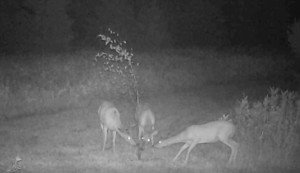 The utilization of The Licking Stick with a trail camera gives you additional time and guided placement of the deer on your property. Lets think about it, if you have a 5, 10, 20 acre food plot, you know the deer are in there on a regular basis. But how do you know where to put the camera? Sure it may be at the end of the trail leading into the the food plot, or a pinch point that led them there...but what would make them stop so you can get a good couple shots? The Licking Stick gives them a direct communal point to connect, scent and spend some time exploring. Communal licking branches are already common, now you have the opportunity to control where those communal licking points are. BINGO. 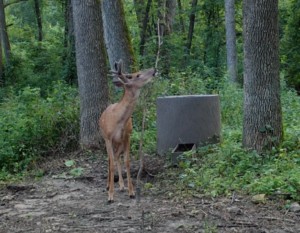 Baiting has been becoming more and more popular (and also controversial) throughout the years to get deer to come to a certain area for trail camera and hunting purposes. But what about the states that have decided baiting is no longer legal? Or maybe you've just decided it's not part of the way you would like to hunt? Or maybe you have limited time on hand and you aren't able to get out there and dump some corn or mineral each day? Let's be real here, its a major time and financial investment to stay consistent and effective with this! Or even if you do have the time and resources to bait, do you really want to disturb the area every single day? As much as you think you are patterning the deer by doing this, believe me...they are patterning you just as much. By using The Licking Stick instead of baiting, you are able to attract and stop deer at a given point without having to use baiting as the method. 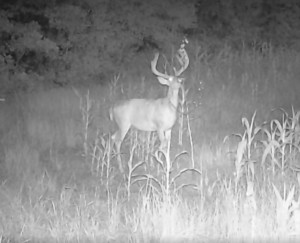 Another reason we prefer and place The Licking Stick, is the fact that communal licking branches are utilized year round by bucks and does, young and old. The Licking Stick doesn't discriminate. It becomes a communication hub for all of the deer in the area, not just bucks as a scrape or mock scrape would be used. Once the deer stop to see, smell, lick and work The Licking Stick, they will begin to show up like clockwork and return to the same Licking Stick every time they are in the area. As more and more deer begin to work this given licking branch and leave their own scent, the curiosity of new deer passing through will peak and they will work The Licking Stick as well, allowing you to begin to inventory and pattern them more effectively. With the scent of multiple bucks, does, and fawns on a communal point...it's safe to say it won't be a milkshake bringing all the boys to the yard. In next weeks blog post we will talk about the specifics of HOW deer scent, digging more into the deer anatomy and how their multiple scent glands work and how this ties in with their use of The Licking Stick and why this is important.

Get your very own Licking Stick System here.